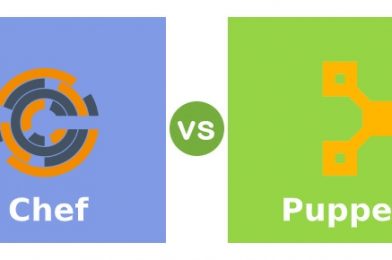 Chef vs Puppet is one of the biggest name in system administration and information technology. Both tools help IT experts to maintain a consistent configuration in all servers. It is very difficult to compare and differentiate both chef and puppet is quite difficult, and decide to choose and who is best for you to use. Puppet or Chef can handle database connection strings where you have a different one for dev, test, and prod.

Both tools can handle these type of work as well.

In this blog I will try to provide you information from all aspect which going to help you to choose between Puppet vs Chef. Discuss everything from the comparison to differences, pros and cons also. This guide is definitely going to help you in your decision of which server to work with. Let’s start-

Chef is an open-source and code-driven configuration management tool used to transform infrastructure into code. It is well-known for automate how infrastructure is deployed, configured, and managed. Chef can also operate in the cloud, on premises, or even in a hybrid format that comfortable for each individual’s needs.

System administrators and IT professionals are able to do a variety of tasks like managing large infrastructures to maintenance of the desired states of nodes.

Chef and Puppet both are very promising configuration management software tools,  we are here to discuss some of their differences and similarities. Both the tools are simple to use and capabilities to automate complex high level IT application environment.

This differences are on the basis of different factors such as Availability, Configuration Language, Setup and Installation, Ease of Management, Scalability, Interoperability, Tool Capabilities and Pricing. These are:

Here comes the main question that How to choose between Chef and Puppet, and the answer is it totally depends on the user’s requirements and purpose for which it going to be used.

No matter what you use at the end but decision is especially from the ones who will end up working with the tool. Someone with the same background might find it more suitable to use Puppet or Chef, before taking the decision also consider the premium features from each tool. At the end, features will help your organization in growth or fall.

Pricing is another factor which included but prices fluctuates a lot with time, and it varies depending on each customer needs.

At last both tools have their own advantages and categories in which they are better than the other. My only intention here is to help you in your decision making. So, it is necessary that you choose the appropriate tool which can be fitted according to your needs.

I hope this blog is helpful for you, and if you want to learn more depth knowledge about Chef and Puppet, I would suggest you DevOpsSchool, One of the best institute for training and certification online. 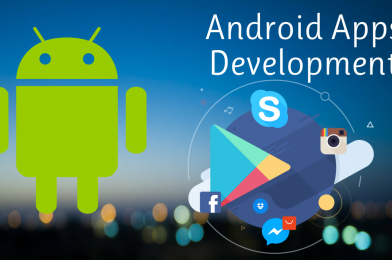 Create your 1st android Application, learn to rectify the applying, and learn the way to make a signed APK that you just will have in the play store. operating with implicit and express intents. an in-depth example of the way to work with Fragments. Learn some customizations sort of a custom ListView, Toast, TextView, and ActionBar.

What does an Android app developer do?

An android developer is responsible for developing applications for devices high-powered by the automation software system. Because of the fragmentation of this system, an automaton developer should pay special attention to the application’s compatibility with multiple versions of automaton and device varieties.

Why do we need android app development?

The reason android rules the app market is its ability to run on additional devices than its competitors. Makers that build devices supporting android apps total those developing to suit iOS-specific apps. Thus, android application development is evidenced to be the wiser and additional profitable possibility.

How are android app developers so popular?

Android’s openness has created it a favorite for shoppers and developers alike, driving strong growth in app consumption. Download users transfer billions of apps and games from Google Play every month.

Skills that required for Android Developer:

List of Best Android Frameworks for App Development in 2021

Founded in 2012, Ionic is taken into account as one of the foremost standard cross-platform development frameworks. It is a free, open-source framework certified by MIT that allows developers to use modern web technologies including HTML5, CSS3, and JavaScript.

Native Android development platforms just like the several others we’ve got already mentioned additionally star among a number of the world’s most well-liked mobile development frameworks. The SDK provides developers with API libraries and developer tools necessary to make, test, and right sensible apps for the Android Platform.

Xamarin is yet another must-try mobile app development framework for developers. It is an open-source platform for building stylish and performant applications for iOS, Android, and Windows. (NET) within the survey mentioned on top of React Native, Xamarin was the 10th most well-liked cross-platform application development framework and also the 15th most admired framework. Surprisingly not like React Native, developers don’t dread the maximum amount.

If you would like to accelerate your mobile app development, NativeScript SDK is associated with another nice selection for an app development framework that’s listed among the simplest hybrid app framework. Backed by a Bulgarian software package company, Telerik, and fully free, it provides app developers with an associate open-source framework for building actually native mobile apps with Angular, Vue.js, JavaScript, or TypeScript while sharing the application code across platforms.

Android is an open-source OS. It helps the developer to register once then they will develop and check completely different apps. On android SDK one-time registration fee is $25 to induce a developer account on Google play that helps you to publish multiple android apps. For paid apps, Google charges a half-hour commission and without charge apps, they’re distributed free among all users.

The mobile app market is that the quickest growing app market in India. android developers will publish their apps on different platforms like SlideME, Opera Mobile Store, Mobango, etc. Most of those platforms or markets are free. Such platforms are making a large marketplace for android mobile app development in India.

Developers will use the android software system Development Kit. they need to pay one time for registration rest will build multiple apps. They will purchase any pc device to create and check their application, by this, they invest less and increase user engagement. therefore end-users are benefited victimization interactive apps and also the company gains a high come-on investment.

4. User Base is Larger

As mentioned before android includes a sizable amount of users and it continues to grow. So corporations are becoming benefited from this range. Android permits you to develop apps and games for a lot of users. So reaching a bigger range of users offers you the perception of the market.

As the market is larger for android, jobs for android mobile app development are increasing in India. Developers who are knowledgeable and experienced will have an honest payment package throughout this trade. Approx. 25000 openings are there for android mobile app development in India, the number itself shows the huge amount of growth throughout this trade. for knowledgeable developer’s payment lies between Rs 1.2 to 4.6 lakh once a year.

Prime Minister Narendra Modi’s Announcement of Digital India has bought tons of changes in India. Cashless India has accrued online banking transactions, with this increase banking applications is been in demand. All banks are able to pay high to experienced developers. Maintaining and publication a banking app isn’t simple because it wants several security checks like customer’s info shouldn’t be leaked. Also, apps like Paytm, Bhim app, Phone pe app, etc are being in demand today.

With digitalized India, several instructional industries have gotten updated with online courses. these days it’s been simple for elders as well as for youngsters to find out with online courses wherever ever they’re they will access the net course and learn new things. Few Examples are; Udemy, Byju’s, TED, etc area unit all android instructional apps.

Who doesn’t prefer to play games, principally game is likable by kids and Youngsters? pub G game has become famous among kids recently. a requirement for the gaming sector for android mobile applications is additionally booming these days in India. The vice sector is giving the very best ROI in India.

The E-commerce trade in India was expected to try and do sales of $32.70 billion in 2018. principally client prefers to shop for through the mobile application as several massive corporations like Amazon and Flipkart sometimes offers large discounts on apps.

After the android development course, you’ll build apps for the foremost standard mobile software within the world. during this training program, you’ll find out about android, came upon your android development surroundings, and build your 1st android app victimization Kotlin, and making a brand new Android Studio project, building your app, and putting in it to an imitator to check, loading and displaying of remote information victimization the GitHub API.

What are the benefits of “Android App” Certification?

Certifications forever play an important role in any profession. you’ll realize some android App professionals, who can tell you that certifications don’t hold a lot of value; This certification demonstrates an individual’s ability to generate complicated searches, reports, and dashboards with android App’s core software system to induce the foremost out of their information.

An android App Core Certified User will search, use fields, use lookups, and build basic applied math reports and dashboards within the android App Enterprise or android App Cloud Platforms. This certification demonstrates an individual’s ability to navigate and use the android App software system.

Agenda of the Android App Developer

There are 2.8 billion or a lot of apps on the play store. With the rise in the use of smartphones, everybody wants everything on mobile be it education or searching. Nearly 65th of searchers shop through an app in India. so to conclude I might say android mobile applications are going to be in demand each in India also as abroad.