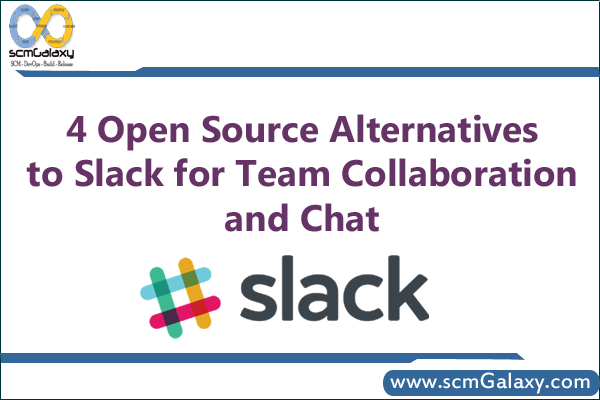 Off course Slack is market leader in terms team collaboration and Chat but here are the list of 4 open source alternatives to Slack for team collaboration and Chat.
Slack
Slack offers a lot of IRC-like features: persistent chat rooms (channels) organized by topic, as well as private groups and direct messaging (again, historically based on IRC).[14] All content inside Slack is searchable, including files, conversations, and people. Slack integrates with a large number of third-party services and supports community-built integrations. Major integrations include services such as Google Drive, Trello, Dropbox, Box, Heroku, Crashlytics, GitHub, Runscope and Zendesk. In December 2015, Slack announced their app directory, consisting of over 150 integrations that users can install.[21] Users can add emoji buttons to their messages, which other users can then click on to express their reactions to messages.
More info – https://slack.com/
IRC
Internet Relay Chat, or IRC, is a protocol which dates back to the late 1980s. Since it’s been around so long, there are numerous open source implementations on both the client and the server side.
Coming with its age, however, are numerous drawbacks. It lacks many features one might expect in a modern chat client, from security to identity management to even just being able to easily transmit non-text components, like images, files, or emoticons (the latter might be seen as a plus to some, however). Some features have been implemented after-the-fact through bot services, including nickname management, logging, and other features, but these vary from server to server.
IRC does still have some things going for it, though. It’s nearly universal, and clients are available for basically every platform out there. Though the command-driven interface isn’t necessarily intuitive for beginners, many clients re-implement commands through a GUI. And if you’re doing upstream open source development, there’s a good chance you’re already hanging out in IRC anyway, so adding a team server might be a path of least resistance.
More – https://en.wikipedia.org/wiki/Internet_Relay_Chat
Demo – https://webchat.freenode.net/
Let’s Chat
Let’s Chat is a persistent messaging application that runs on Node.js and MongoDB. It’s designed to be easily deployable and fits well with small, intimate teams.
It’s free (MIT licensed) and ships with killer features such as LDAP/Kerberos authentication, a REST-like API and XMPP support.
Let’s Chat is a side-project of the development team at Security Compass. (A real life 10% time project!)
More –
https://sdelements.github.io/lets-chat/
https://github.com/sdelements/lets-chat/wiki
Mattermost
As an alternative to proprietary SaaS messaging, Mattermost brings all your team communication into one place, making it searchable and accessible anywhere. It’s written in Golang and React and runs as a production-ready Linux binary under an MIT license with either MySQL or Postgres.
More – https://www.mattermost.org/
Rocket.chat
Rocket.Chat is an incredible product because we have an incredible developer community.
Over 200 contributors have made our platform a dynamic and innovative toolkit, from group messages and video calls to helpdesk killer features.
Our contributors are the reason we’re the best cross-platform open source chat solution available today.
More – https://rocket.chat/
Tagged : Alternative / Chat / Collaboration / Instant chat / IRC / Let's Chat / Mattermost / Open Source / Options / Rocket.chat / Slack / Slack Alternatives / Slack Alternatives Tools / Team / Team collaboration tools / Team communication / Tools / Top