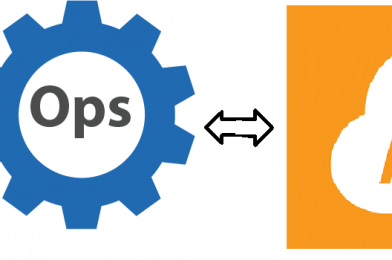 Guys, today in this blog you will learn in detail about DevOps and AWS DevOps, so let’s know what is DevOps and AWS DevOps. DevOps is a term of the two words ‘development’ and ‘operations’. DevOps is not a technology, it is a combination of cultural, practices, and tools that increases an organization’s ability to deliver applications and services. As we know, AWS DevOps provides application developer teams with the means to efficiently implement continuous integration and continuous delivery (CI/CD). This enables them to securely store and version application source code, while automatically building, testing, and eventually deploying the application to either on-premises environments or to AWS.

DevOps is a software development methodology where the Development team & Operations teamwork as together. After adopting DevOps, it helps to increase the speed of an organization to deliver applications and services. And it can be defined as the alignment of development and IT operations with better communication and collaboration. And those who are DevOps engineers use many tools for the development & operations processes so that our life becomes easy. These popular DevOps tools are- Docker, Git, SVN, Maven, Jenkins, Selenium, Kubernetes, Puppet, Chef, SaltStack, Nagios, Splunk, etc.

Here are the some Benefits of DevOps:-

AWS stands for Amazon Web Services, It is a cloud infrastructure, is an extensive, emerging cloud platform offered by Amazon that contains a combination of IaaS, PaaS, and SaaS offerings. Also, AWS can provide organizational tools including database storage, computing power, and content delivery services. It can be used to store crucial data.

The below image gives you an idea about AWS certifications

What is AWS DevOps?

AWS DevOps is Amazon’s answer to implementing the DevOps philosophy using its cloud platform and dedicated tools and services. provides application developer teams with the means to efficiently implement continuous integration and continuous delivery (CI/CD). This enables them to securely store and version application source code, while automatically building, testing, and eventually deploying the application to either on-premises environments or to AWS.

Difference Between DevOps and AWS DevOps:-

DevOps is a software development methodology where the Development team & Operations team work as a together. After adopting DevOps, it helps to increase the speed of an organization to deliver applications and services. And it can be defined as the alignment of development and IT operations with better communication and collaboration. AWS DevOps is Amazon’s answer to implementing the DevOps philosophy using its cloud platform and dedicated tools and services. provides application developer teams with the means to efficiently implement continuous integration and continuous delivery (CI/CD).

I hope this post will be very helpful for you!

It sounded like malarkey to me. I was more interested in actually seeing a Stryker vehicle for the first time – we hadn’t received any of them yet. Then, when we finally received our first shipment of Strykers to the unit, I was disappointed – it was basically a shorter, meaner-looking Winnebago, painted some hideous shade of green, with a paltry-looking .50 caliber machine gun mounted on top. WHAT?!? Where are the phaser cannons?!? What exactly do you want us to “FINISH DECISIVELY” riding around in that sardine can?!?

Fast forward two and a half years, and I finally got it. I wasn’t able to understand all that “SEE FIRST” malarkey until I saw Stryker units operating in context amongst other, “regular” Army units. Stryker brigades are FAST – we were able to identify opportunities, process intel, plan on the fly, and reach the objective before more regular units even knew something was going on.

What was the secret to all this speed and agility? It certainly wasn’t the sardine can, and I only wish I could attribute it to phaser cannons…

It was the IT infrastructure – the system of systems that allowed each “department” of the brigade to communicate with each other, to share relevant information with each other at lightning speed. You see, the Army, back then at the turn of the century, understood what today’s enterprises are starting to grasp – IT is a strategic asset, and if employed correctly, IT is a key enabler of corporate strategy. The ability to identify business opportunities and make sense of what’s going on faster than the competition allows enterprises to FINISH DECISIVELY in the market.

I know, I know. What does the Army know about trying to get a release of changes into production during the assigned maintenance window? It sounds bizarre, but imagine yourself in the middle of a maintenance window where the satellite system goes down during an Iraqi sandstorm right before the unit is to depart on mission. Pre-combat checks have occurred and units are staged, ready to depart. All we’re waiting on is for all vehicles to digitally receive the final version of the plans, which is now held up because the satellite dish went down in this stupid sandstorm. No pressure, IT guys and gals – you are now the lynchpin to the entire operation.

As enterprises grasp the strategic importance of IT they’ve begun to explore and launch initiatives to accelerate the delivery of services. One of these practices is Continuous Delivery, synonymous with the underlying principles of DevOps. Continuous Delivery is all about ensuring production-ready code at all times, and shortening the feedback cycles from the market back to the business. In most cases, ensuring production-ready code at all times requires automation of the delivery pipeline, reducing the risk of human error in deployment processes and cutting down the time it takes to complete manual processes.

The enterprise has a vision of Continuous Delivery that will enable it to ACT FIRST in the marketplace, but the reality of the situation is that there are still manual processes in place which prevent the enterprise from achieving that vision. Companies have invested in release automation to help them automate their delivery pipelines, orchestrating a deployment as a system of systems. This is a terrific step in the right direction toward Continuous Delivery, but there are still some application components which are relegated to manual processes that hamper the overall pipeline – database changes being one of those quirky components.

Datical DB was architected to enable initiatives like Continuous Delivery for the database component of application releases, and to “snap” into your existing automation frameworks so you can leverage your investment in automation. If you’re investigating Continuous Delivery or have already invested in release automation, I invite you to join us for an upcoming webcast hosted by our partners at Serena Deployment Automation on the topic of Automating Database Deployments in Your Continuous Delivery Pipeline.

IT is the key.