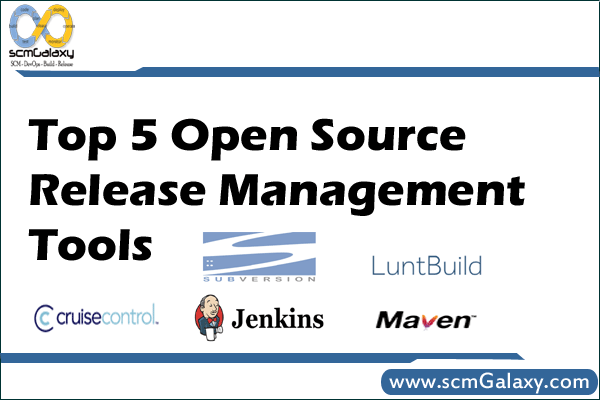 CruiseControl basically known as continuous integration tool. It can be used in Release management process. Cruisecontrol is an open source tool which is written in java and supports cross platform and it was developed by CruiseControl development team and initially released in the year 2001. You can extend this tool with the help of plugins and extensions.
2. Luntbuild

LuntBuild is known as Build management and continuous integration tool. This one is another open source release management tool which is written in java ans supports cross platform. This tool is developed by PMEase. This tool is easy to install and configure. It has a clean web interface.
3. Maven

Maven is also known as build tool but it’s also an open source release management tool which is written in java and supports cross platform. Maven was initially released in the year 2004 and developed by Apache Software Foundation. Maven can also be used to build and manage projects written in C#, Ruby, Scala, and other languages.
4. Jenkins

Jenkins is one of the most popular tool for Continuous integration but it can be used as a release management software. This software is written in java and it was initially released in the year 2011. It was developed as a Hudson project as Sun Microsystems which was later take over by Oracle corporation. The great thing about this tool is its functionality can be extended with plugins.
5. Subversion (SVN)

Subversion or SVN is a versioning and revision control system but it also can be used as Release management software . You can say this one is the leading release management tool in the open source category. This tool is written in C and it supports cross platform was developed by  CollabNet Inc in the year 2000.

So, That’s it. Now it’s your turn , share your views in this article and if you think this list should contain some other tools instead of this than fee free to share with us the in the comment section below.