#Make route for show data , back and submit.

Store data in data base when we hit the submit button

Step 08 : Show data (when we click on show data button)

4. Return show.blade.php With compact (all data)

5. Route in edit and delete button.

composer require VendorName/PackageName – This command installs a package and any packages that it depends on.

https://packagist.org/ This is the website, from where you will get Php packages. This is the package repository of Php. You have to open this site, whatever your requirement is, you can do that package.

If you want a viewer with PDF, then you search by typing PDF. Here the first one wants Dompdf / Dompdf, so I clicked on it. After clicking on it, it will show you what is the version tag. And it will also show how to install it. So to install it, you have to type the command composer require dompdf/dompdf.

Before running this command, you should check that the composor.json file which you have is empty. That is, our project is not dependent on anyone. But now we have the requirement of this project so we will run this command.

You have to create a composer.joson file and write JSON code yourself with the required properties.

We need to create a folder in xampp server. I am going to the local server (C /Drive ) then going to xampp server. Here at htdocs. Then here we will create a project folder that will run on the server.

I will need a text editor I am using Visual studio code you can use notepad, notepad++, sublime text anything.

Here we create a file index.php and write the code of the PHP in it. And if we need to start the server, then we have to go to Windows Search and search xampp. After that open it and start the Apache server.

After this, we have to run on the tube, for that we have to do a few searches in the search in Windows Manu and open the Run Administrator. 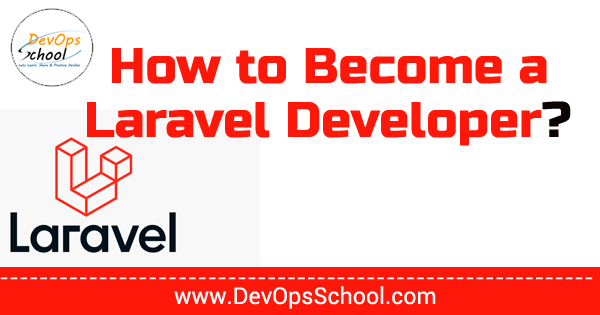 In the world of web development, things are constantly changing. On the other hand, developers have to keep pace with the changing technologies, while businesses look for efficient technologies that help them engage with customers efficiently.

One technology making major waves in the web development field is Laravel. The framework is a hit among web artisans because of its accessibility, power, and other add-on tools to build robust applications. Using the agile development approach, Laravel builds the entire development process without sacrificing functionality.

Laravel is a free, open-source PHP-based Web Framework for building High-End Web Applications, following the Model View Controller architectural pattern and based on Symfony. It is created by Taylor Otwell. Laravel is a powerful MVC PHP framework designed for developers who need a simple and elegant toolkit to build full-featured web applications.

What is Laravel Developer?

Laravel Developer is a software professional specializing in the Laravel framework. Now that Laravel technology includes a wide range of tools and libraries that speed up the development cycle, a Laravel developer can focus on design, innovation, functionality, and other things that really matter.

Prerequisities of a Laravel Developer:

It is fundamental to know PHP: Larvel is a PHP web framework and therefore must be well aware of PHP before placing his hand on the development process. Although it is built on the MVC pattern, its building blocks are PHP functions.

Clarity on the MVC pattern: Larvel is a PHP web framework and therefore must be well aware of PHP before placing his hand on the development process. Although it is built on the MVC pattern, its building blocks are PHP functions.

Why is Laravel the Best PHP Framework?

Because of the dire need for structured development methodologies. Laravel is a PHP framework that has become the go-to solution for developers around the world. It hosts a large ecosystem that allows for instant hosting and system deployment.

In the corporate space, Laravel web development fundamentals have been extensively used to build websites that are capable of running behind complex algorithms and handling multiple visitors at once.

Here are the some few reasons:

What does a Laravel Developer do?

The world of software technology has given rise to a community of developers who specialize in various technologies.

A Laravel developer is like any other software developer. But, one thing that sets them apart is their special affinity for the Laravel framework using the PHP programming language. Larvel developers make it possible to create highly functional web applications that enhance the user experience.

Roles and Responsibility of Laravel Developer:

The current PHP version is one of the most popular and desirable frameworks for companies that want to hire a Laravel developer, so if you’re well versed with the current version, your fellow developers will have your say. PHP includes over-the-top benefits and many other features that every software developer dreams of. It has libraries and modules which makes dynamic development a snap, plus saves development cost.

The Future Scope of Laravel Developers:

Before saying anything about the future, I would like to mention here some MNCs which are using PHP today. Google, Yahoo, Rediff, Facebook, Intel, Digg, Flickr, Zynga, Borland, eBay, Nokia, Oracle, etc. I am telling you only one thing that there are a lot of small and popular online web applications based on PHP which is running online and they are all managed and addons by PHP developers. This means you have lots of opportunities to work with your dream companies.

Some of the most frequent designations include Laravel Trainee, Programmer, Web Developer, Web Designer, Software Developer. So, you see the future is bright!

To start with Laravel, check out the DevOpsSchool course. You’ll learn basic structures and techniques and dive into advanced Laravel concepts such as Views & Blade Templating Engine, Working with Routes, Handling Requests & Responses, Using Controllers and Models. You’ll even also join our Online and Classroom Programs. 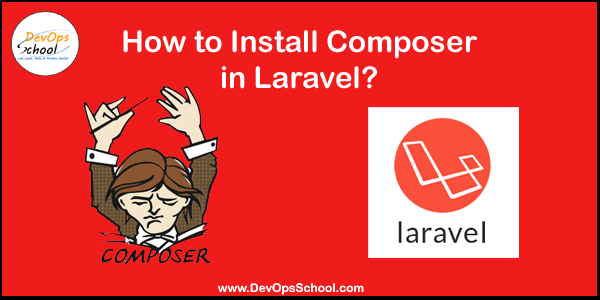 -May need to set Path or use php composer.phar init

Go to the windows search menu and type cmd

How to Update Composer

There is some new update in composer, so if you want to update it then you have to run command for it:

How to Roll Back Composer Update

If that update starts happening, then you can roll back that update and go back to the old versions. For which you have to run the command: 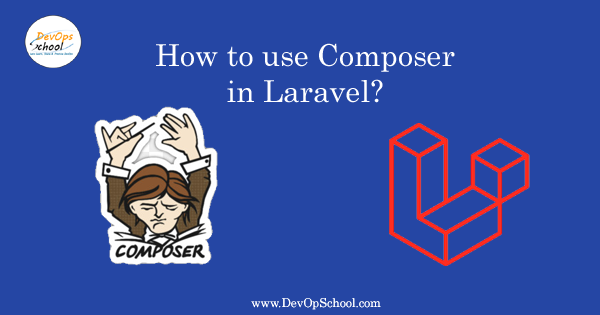 Composer is a tool dependency management in PHP. It allows you to declare the libraries your project depends on and it will manage (install/update) than for you. Composer is not a package manager in the same a Yum or Apt are. Yes, it deals with “packages” or libraries, but it manages them on a per-project basis, installing them in a directory (e.g. vendor) inside your project. By default, it does not install anything globally. Thus, it is a dependency manager. It does however support a “global” project for convenience via the global command.

You have a project that depends on several libraries. The libraries that I used in my project to create PDF are also supported by other libraries. It gives you the urgency to declare those libraries that you are on these libraries as it will manage them all for you. It will find out which packages are required for the project we have. Which version of the package is required and will install it for you.

Blade is the simple, yet powerful templating engine that is included with Laravel. Unlike some PHP templating engines, Blade does not restrict you from using plain PHP code in your templates.

Blade template files use the .blade.php file extension and are typically stored in the resources/views directory

Displaying Data – You may display data that is passed to your Blade views by wrapping the variable in curly braces.

Calling Function – You may also echo the results of any PHP function by wrapping the function name in curly braces.

Note – You can put any PHP code you wish inside of a Blade echo statement.

Blade also allows you to define comments in your views. However, unlike HTML comments, Blade comments are not included in the HTML returned by your application.

{{– This comment will not be present in the rendered HTML –}}

If… elseif… else… Directive